"The threat to the wedding is a threat to democracy." - Metropolitan Police Commander Bob Broadhurst. 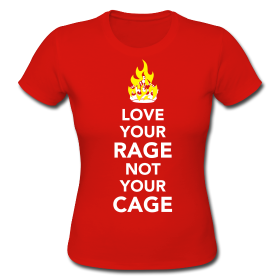 Love your rage, not your cage - perfect for royal weddings, or better: funerals. Hint: It's an anti-royal wedding t-shirt that'll keep on giving.

‘Bibliosexuality is the name,’ he announced, ‘I have given to this disorder of the senses; where an unnatural relationship with a work of literature is either strongly desired or obtained, although, I should add, that the more advanced the case the less important becomes this distinction; for bibliosexuality wastes the powers that distinguish between imagination and reality. It is invariably accompanied by a peculiar sensitivity to words, and by a conspicuous delight in the sensual and orgasmic possibilities of language. Because of the essentially sexual nature of this complex, it is most easily isolated, when, say, the novelist is dealing with the wiles and guiles of a seasoned seductress. Indeed, these temptresses become working metaphors for the novelists themselves; one can be seduced by a book, just as a character can be seduced in the pages; the novelist is a seducer, a verbal lover, a lover of verbs. Every novelist is a bibliosexual, and it is his implicit intention to corrupt his readers and make them his coequal victims; thus the idea of involvement is crucial, and sex again is the great involver, so that the dual and whole process of the seduction is to reach a prefabricated climax which obviously need not bear any relation to objective reality at all. Now the moment of greatest reality is the orgasm, the point of total involvement. The novelist creates a world in his book, so it follows that his greatest triumph is the manipulated orgasm; that is, the total possession of the reader.’

This is mostly my fault. ?